The U.S. is unlikely to see an economic correction in the coming year

Our proprietary recession model continues to show a low probability of a recession occurring in 2019. Supporting U.S. economic growth has been the expansion of employment and growth of wages; however, we are concerned that several consumer trends has started to slow. In addition to the slowing consumer trends, the slowing global economy and the international tariffs also weigh on our outlook.  Overall, we expect continued moderate economic growth through the remainder of the year. 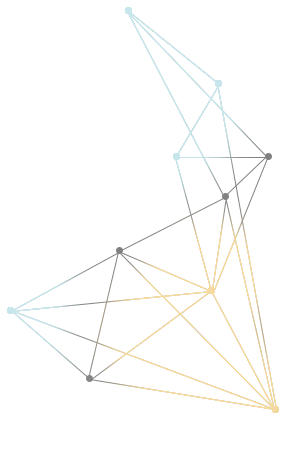 We have been hearing mixed reports from digital service firm owners recently about the quality of their first quarter revenue and their outlooks for the second quarter. Overall, owners appear to have had a decent 1Q but they have noted that lead generation has become more difficult. Pipelines have remained full due to larger project sizes rather than growth in client count. This appears to be a continuation of a trend we picked up on in 2018 where the vast majority of growth came from expanding project sizes rather than new business. We have also heard multiple reports of clients pushing out projects to later in the year which could be a factor in 2Q and 3Q pipelines that appear fuller than they normally would be.

Digital service firms should view this report as cautious but still slightly optimistic. The first quarter obviously came in better than most were expecting but we are seeing some weakening in the trends that drove this growth. We expect this to lead to a slowing second half, which combined with project delays could make for a slightly challenging 2019.

Explaining The Recent “Doom And Gloom” 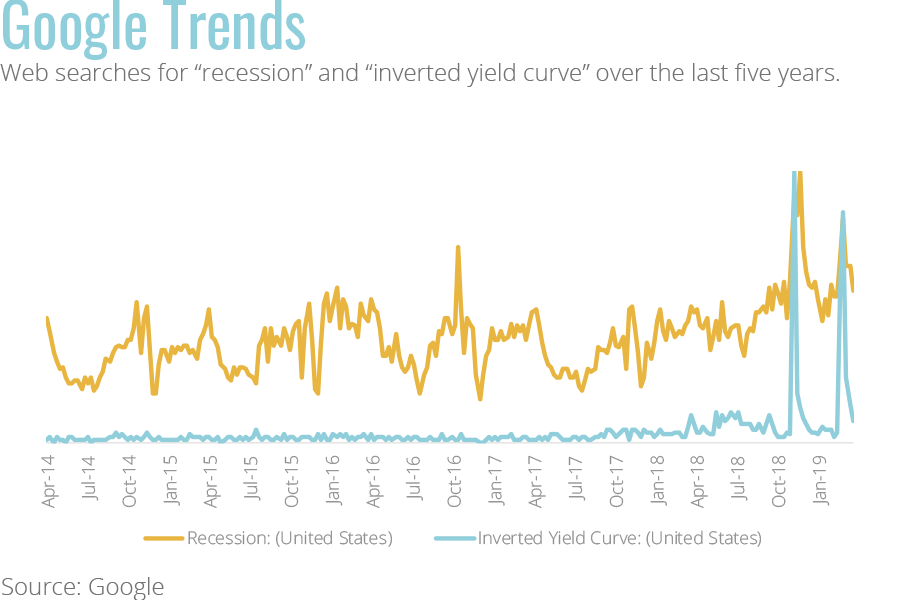 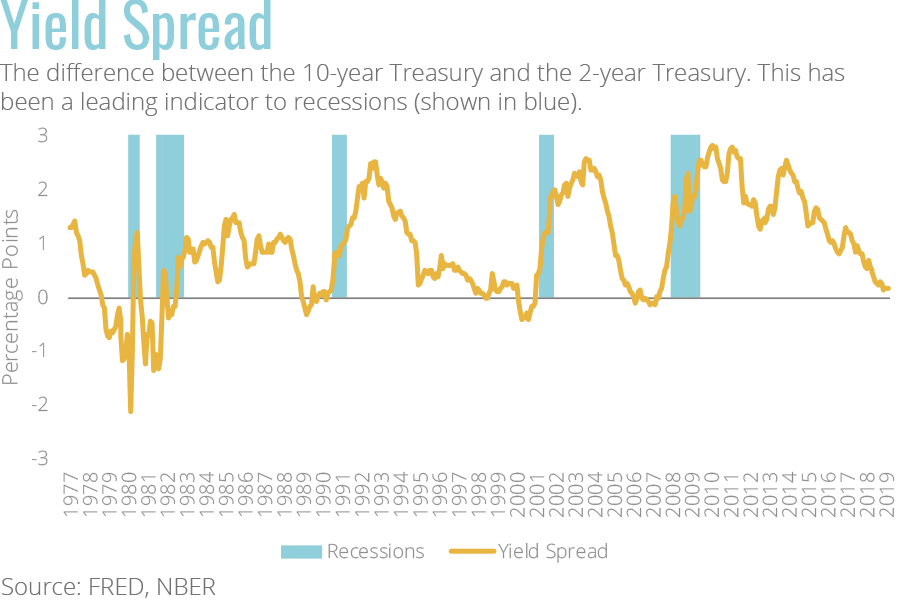 We have completed the first quarter of 2019 with the U.S. economy growth exceeding 3% (first read of 3.2%).  During the quarter the Atlanta Federal Reserve projected 2.8% growth, up significantly from the initial forecast in early March for 0.3% growth. If you were paying attention to the headlines and the news during March, there were several weeks that you would have been hiding under your desk believing an economic collapse was imminent. Looking at Google Trends, web searches for “recession” and “inverted yield curve” have been frequently searched starting last December and spiked again at the end of March.

What is an inverted yield curve, and why is it associated with recessions? Let’s start with the yield curve – it is the rates for U.S. Treasuries at different maturities. It starts at 3-month Treasury bills to 30-year Treasury bonds. If investors are optimistic about the economic environment, they will want to be incentivized for holding longer term bonds, which leads to higher rates. When investors are worried about the economic outlook, they will “lock in” returns of those longer-term maturities and accept lower yields due to uncertainty about the short end of the curve. Therefore, when the yield curve inverts, it has been a very good predictor of recessions as investors are uncertain about the economic outlook. The yield curve has flattened during the course of the year, which has coincided with a tempering of economic growth expectations.

We prefer to use the difference between the 10-year maturity and the 2-year for U.S. Treasuries as one of our indicators within our recession barometer since it has led to fewer false positives than some of the other bond maturities. The Yield Spread chart shows the “spread” or difference between the 10-year Treasury and the 2-year Treasury. This indicator has been a leading indicator to recessions. Also of interest, the yield curve returns to normal when the recession starts, which can lead to second guessing for economic forecasts due to investors expecting improved economic returns in the long run.

Recessions usually have a trigger event that causes the economy to contract. Looking back at the 2008 recession, which there has been numerous books and articles written, I think everyone can agree that they saw the housing market as “hot”, however only a few saw the “cracks” in the financial system that would cause all of the other derivative impacts and cause the second worst depression in 100 years. There are things that we can point to that give us concern, but we are not seeing (or hearing) any of the potential “cracks”.

Our proprietary economic model currently shows a low probability of recession. While several indicators are “flashing” warnings, we have not reached the required threshold to give us concern. Our Base and Best-case scenarios both show no signs of recession during the calendar year. However, our Worst-case scenario does show potential for economic contraction, which would occur in the second half of the year. There are items that concern us, such as the slowing global economy and the end of the Federal Reserve tightening cycle has typically led to recessions. However, we are more concerned with the consumer sentiment and personal consumption expenditures falling to levels that would cause us to sound the alarm. As we noted in the last report, you can’t bet against the U.S. consumer, which accounts for roughly 70% of U.S. GDP. However, we will be monitoring these indicators closely over the next month.

We believe recession risks have increased from the beginning of the year; however, we have not made any changes to our business strategy that would deviate from economic growth. GDP growth is still expected to decelerate in 2019, which could cause the feeling of economic contraction. The news surrounding the “trade war” continues to cause uncertainty among businesses and tariffs continue to be challenging as companies retool supply chains and incur incremental costs. Therefore, we are viewing the current economic outlook as moderate, we will not see high growth, but we do not expect to experience an economic contraction either, just modest economic growth for 2019. 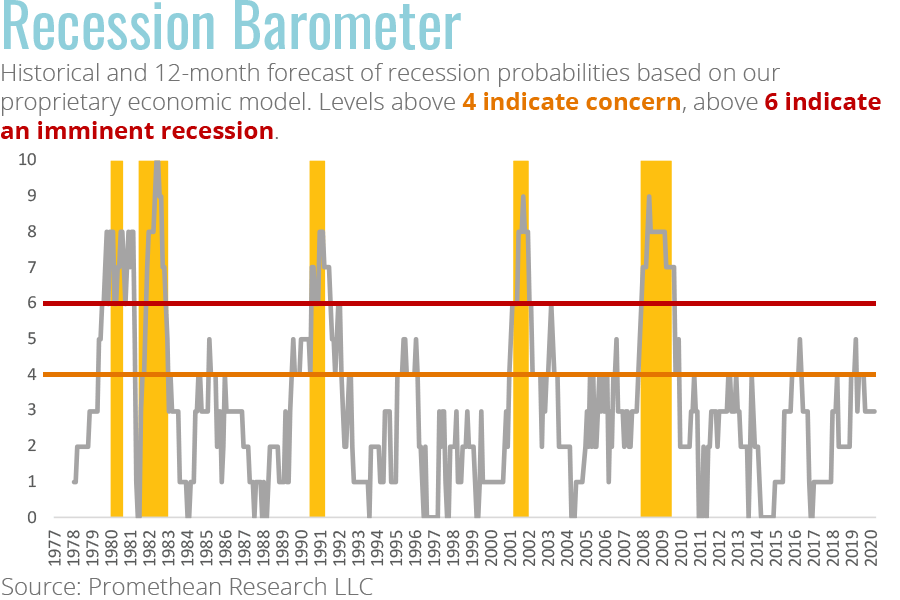 Get the latest updates delivered straight to your inbox! 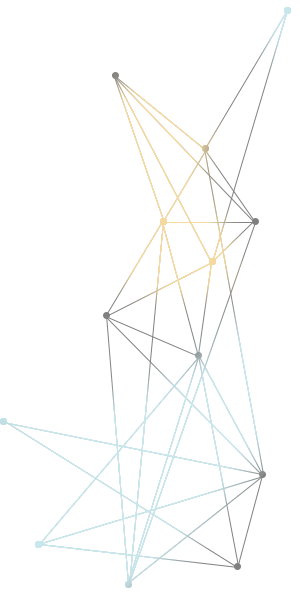